Anyway, let’s get on with it. I’ve already discussed the primary source of bitterness in beer, so now I’ll revisit the topic of bitterness from a different view: the physiology of bitterness.

The sensation of bitterness is not well understood at all. Nearly every aspect of bitterness is shrouded in complexity, and although new research is continually expanding our level of understanding there is still a great deal to be learned. The reasons bitterness is a tricky subject to elucidate are numerous and varied. There are a wide variety of chemical compounds which are bitter, such as polyphenols, organic acids, peptides, salts, sulfimides, and acyl sugars. This variety in molecular size and shape in turn implies a variety of mechanisms of operation. There is also a huge variation in how bitterness is perceived by individuals, and these variations are largely genetic in origin. Further confounding our understanding of these mechanisms are the difficulties that arise when attempting to communicate the qualities of bitter sensations. There are no agreed upon vocabularies for describing bitterness and its qualities, so while one person may describe caffeine as having a harsh and unpleasant bitterness another person may call it medicinal and lingering. Are they perceiving the same sensation, and is there even a way to tell for sure? Yet another factor in the complexity of bitter taste is the interactions that bitter sensations have with other sensations, most notably sweetness. Certain mixtures of bitter and sweet compounds can have interesting and unexpected effects on each other, with some sensations being suppressed by the presence of other compounds. In some cases there can be a synergistic effect where the total sensation is greater than what would be expected from a merely additive effect. In this article I will explain some of the mechanisms and characteristics of bitterness as we understand it so far.

The types of compounds which are known to elicit bitter responses are quite varied in their sizes, shapes, and in the functional groups they contain. Caffeine is a commonly studied bitter compound which is found in (or added to) many different types of foods. It is a relatively small molecule known as a xanthine alkaloid, with 5 and 6-membered rings, and a number of amine/imine (-N- or -N=) groups .

Epicatechin is a type of polyphenol found in nearly all vegetative materials (including hops) and is also bitter. This compound has three 6-membered rings with a number of phenol groups (those -OH’s) hanging off them.

Urea is probably the simplest bitter compound, at least from a structural standpoint. It contains a single carbonyl unit (C=O) with an amine group on either side. 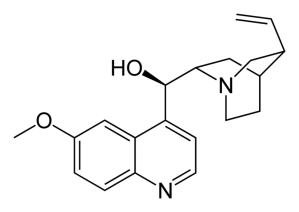 Conversely, quinine is one of the more complex bitter compounds, as it has 2 different fused-ring structures: the two 6-membered conjugated rings, and the bicyclic amine group (two 6-membered rings which share 3 carbons and an amine). This compound is made popular by it’s inclusion in tonic water, and thereby also the stately Gin and Tonic.

Apart from a handful of peptides (small sections of proteins), sucrose octaacetate may be one of the most structurally complex bitter compounds around. If you had lingering issues with sucking your thumb when you were a kid and your parents put some terribly bitter stuff on your fingers to persuade you otherwise, then you’re familiar with this compound. It’s made up of a sucrose molecule at the heart (if you look closely through all that jumble you can make out the 6-membered ring of a glucose molecule, and the 5-membered ring of a fructose molecule), with eight acetate groups lovingly attached at each of the available hydroxyl groups. This particular molecule is also a great example of how similar bitterness and sweetness actually are. There are a number of molecules, both bitter and sweet, which when modified slightly will change their taste to the other side. Substituting the double-bonded oxygen atom (=O) in the molecule dulcin with a sulfur atom will turn the artificial sweetener bitter. Similarly, closing the middle ring of the highly modified polyphenol neohesperidin dihydrochalcone will turn that sweet molecule into the bitter neohesperidin. These are but a few examples of this kind of phenomenon, and this relationship between the bitterness and sweetness of related molecules provides some interesting insight into the mechanisms underlying these sensations. We will examine these mechanisms next.

Many bitter compounds are detectable at very low thresholds (eg. 4.5ppb for denatonium benzoate), and because of this it’s apparent that bitterness is a receptor-based sensation, meaning that there are specific structures on the tongue which respond to specific molecules. With the wide variety of compounds which are bitter, it seems likely that there are a number of different kinds of receptors as well. The fact that genes have been discovered which control sensitivity to specific (but not all) bitter compounds, and also that compound mixtures can have synergistic effects (beyond merely additive) also support the idea that there are numerous types of taste receptors, both for bitterness and sweetness. The specifics of these synergistic effects (or lack of) are rather enlightening: in the case of saccharin and acesulfame, artificial sweeteners with similar molecular structures, there is no synergy as they are similar enough that they are probably competing for the same receptor sites. As yet, however, there have been no studies which examine the synergistic effects of bitter compounds that I am aware of, but given the various parallels between bitterness and sweetness, I wouldn’t be a bit surprised to find that they exist.

So, on a general level, how do these receptors work? How does a molecule tell your brain that it is bitter? Each cell in your body has an electrochemical gradient across its membrane which means that the inside of the cell has a different ionic charge than the outside. Cells have a number of different methods for maintaining this difference, including various channels and pumps for transporting different charged particles across the barrier, usually the positively-charged hydrogen ions. This means that in a normal resting situation, taste cells have a slight negative charge internally. Whenever something happens to the cell which alters that gradient to a particular level, the cell’s membrane-bound channels open briefly and the cell depolarizes which stimulates the nearby nerve cell and a signal is sent to the brain.

More specifically, this process involves a whole series of proteins and other molecules that probably operate in a variety of different ways, each leading to the same end result: bitterness. The receptor, or ligand-binding site, is a large membrane-bound protein made up of a number of different sections both on the inside and the outside of the cell. When a ligand (or, in this case, a bitter molecule) attaches to its specific binding site, it causes a change in the shape of this protein which allows its internal portions to interact with another protein called a GTP-binding protein (or G-protein). This G-protein in turn activates a second messenger inside the cell which is a type of enzyme, either adenylyl cyclase, phoaphodiesterase, or phospholipase C. Each of these enzymes does different things, either producing cyclic adenosine monophosphate (cAMP), hydrolyzing cAMP, or releasing internal stores of calcium ions, respectively. These resulting molecules then go on to affect the activity of the membrane-bound ion channels which causes the cell’s electrochemical gradient to change and the nerve cell to be stimulated. Below is a graphic I found on the intertubes. It does a reasonable job expressing the basic idea without being overly complicated.

This system can be stimulated at different levels as well, and the various sections can also overlap simultaneously. A single receptor can activate a few different G-proteins, or multiple receptors can activate a single G-protein. Multiple second messengers can also be involved, as well as multiple ion channels. Once you begin to see all the ways that these different combinations can lead to a nerve impulse, it does not become implausible that this is probably a big reason why there are vast differences in how different compounds can be bitter in different ways, whether more intense, longer lasting, more or less pleasant, etc.

So we now have a somewhat better understanding about how the tongue and the brain perceive bitterness, but what about all the other factors that affect our perception of bitterness? Well, one factor is age: bitter and salty perception declines with age, although it’s been shown that sweet and sour perception is relatively unaffected. Interestingly, the decline of bitterness sensitivity is really only applicable when analyzing specific locations on the tongue. It is believed that whole-mouth perception may compensate for these localized defects to the point where the elderly may not even realize that they are losing sensitivity. We’ve already mentioned how some sensations can be altered by other compounds present in the food/beverage, but the extent of this is quite striking. Caffeine has been studied extensively in this regard. Caffeine’s bitterness can be supressed by sugar and salt, with natural sweeteners working better than artificial sweeteners. Acids can either suppress or enhance caffeine bitterness, depending on concentration. Some research has shown that these suppression effects might be taking place in the nervous system rather than by receptor competition on the tongue. There is a fair bit of speculation that a person’s diet has an effect on how they perceive bitterness as well, but there is not agreement among researchers on this. As mentioned, genetics play a role in sensitivity. Genetic research has shown that the ability to taste PROP (6-propyl-2-thiouracil, a very bitter compound used to test bitterness sensitivity) is linked to the chromosome locus at 5p15, with some influence from a modifier locus on chromosome 7. Considered a dominant trait, 70% of Caucasians are sensitive to PROP while at least 90% of Asians and African Americans are PROP tasters. There is also a subgroup of PROP tasters who are extremely sensitive to it; they are known as “supertasters”, and they are mostly women. These supertasters have more fungiform papillae on their tongues and more taste buds on the papilla. It is unclear whether these supertasters are also more sensitive to other tastes. Some research has shown that PROP tasting is linked to heightend sensitivity to caffeine, saccharin, and quinine, but not urea. Again, more evidence that bitterness perception is controlled by a variety of different types of receptors and other factors.

There’s lots of stuff we’re learning about taste and bitterness, but there is still a long way to go. It’s pretty fascinating, since this topic is a convergence between genetics, food science, physiology, and nutrition. All of these confounding aspects also tend to make it a very complicated topic.

One response to “Bitterness, Pt. II”