Diacetyl – “Who put butter in my beer?”

Diacetyl (dye-assa-TEEL, or dye-ASS-itle) is probably one of the most well-known flavors related to brewing.  It’s buttery aroma is easily recognized at levels above threshold but, as much as is known and recognized about this compound, I’m constantly amazed and disappointed by how much “butter-beer” is still being produced. This post will briefly explore the various ways that diacetyl arises in beer.

Diacetyl (2,3-butanedione) is one of a class of compounds called “vicinal diketones” (VDK). In chemistry-speak, “vicinal” essentially means “adjacent”, and “diketone” means that there are two ketone functional groups (a ketone is an oxygen double-bonded to a carbon in the middle of a carbon chain). If you look at the molecular structure in the link above, you’ll see that it is a 4-carbon chain (hence the “butane” root in the name), and the two ketones are on the vicinal positions of the #2 and #3 carbons (ergo, 2,3-butanedione: two ketones on #2/3 carbons of a 4-carbon chain). The other main VDK in beer is 2,3-pentanedione (pentane – can you guess what this one looks like?), but it is usually found in beer at levels below that of diacetyl.

Diacetyl, as mentioned already, has a buttery or butterscotch-like aroma. Open a bag of microwave buttered popcorn and you’re hit in the face with diacetyl. At very high levels it can even start to affect the mouthfeel of the beer, causing a slick or oily mouthfeel.  The detection threshold of diacetyl in beer is typically between 10 and 40ppb, although I have determined the personal thresholds for 11 of my panelists and they range from 7-190ppb, with an average of about 60ppb. Personally, my threshold is about 20ppb and beers with higher levels are so offensive to me that any beer with detectable diacetyl usually goes down the drain. Many times you may be served a beer which appears to have no hint of diacetyl, but as you work your way down to the bottom of the glass you begin to detect it. This is because the beer is warming up, which allows more diacetyl to volatilize into the headspace of the glass (and your nose). Too many times have I started in on a good and cold beer only to dump the second half because the “Big D” had begun to show its stinky face.

Common levels for diacetyl in beer range from 30ppb to over 1ppm [1]. Until recently, I would have had a hard time believing that there was packaged beer out there with 1ppm diacetyl. That is, until my panel tasted a beer from a local micro-brewery which was so high in diacetyl that we just had to run it through our gas chromatograph to find out how much was actually in there: almost 900ppb. Nearly all of our beers that we make here at The Company are below 30ppb or so, with most falling easily below 20ppb. I would hazard a guess that the big American Lagers/Pilsners are about 10ppb or less, but I don’t know for sure.

There are a few different sources of diacetyl in beer, only two of which are widely discussed.  The first is during fermentation, where it’s created by the brewer’s yeast.   The other well-known source is from bacterial infection.  The third source is probably the least known:  beer aging.  Below, we’ll examine each of these sources.

Brewer’s yeast (Saccharomyces cerevisiae) typically produces significant amounts of diacetyl during fermentation. Diacetyl is created by non-enzymatic oxidative decarboxylation of alpha-acetolactate, which occurs outside the yeast cells [2]. Alpha-acetolactate is produced as part of the valine anabolic pathway (the reaction pathway yeast use to create the amino acid valine), so it’s clear that valine has a very important role in diacetyl formation by influencing the yeast’s ability to produce or reduce diacetyl levels. This influence is demonstrated by the fact that the enzyme which produces alpha-acetolactate is directly inhibited by the presence of valine, so when the yeast’s internal valine levels are high enough this enzyme is inhibited and total diacetyl production is reduced. Since valine is an amino acid (one of about 20 protein building-blocks), then it stands to reason that protein levels in wort will exert an influence on diacetyl formation during fermentation, and this has been shown to be the case. Worts which are deficient in free amino nitrogen (FAN; important nitrogen/protein nutrient sources for yeast which are derived from the malt) are therefor also deficient in valine, and it’s been demonstrated that low levels of FAN in worts can lead to elevated diacetyl levels in the final beer. Since there is less valine for the yeast to take up, this leads to more activity of the enzyme which produces alpha-acetolactate (acetohydroxyacid synthase), which in turn leads to more extra-cellular alpha-acetolactate and results in high levels of diacetyl.
Regardless of how much valine (or FAN) is present in the wort, diacetyl is always produced during fermentation, but as yeast complete the fermentation process they begin to take diacetyl back up into their cells and reduce it (chemically and quantitatively) through enzymatic action into acetoin and 2,3-butanediol (both of which have higher thresholds than diacetyl, which means don’t play as much of a role in beer flavor). If one were to plot diacetyl levels through the course of a fermentation, it would go from zero to somewhere in the hundreds of parts-per-billion in the first few days before it begins to drop (roughly 50% per day, depending on yeast strain and temperatures) to levels well below 100ppb. This is how brewers, especially the bigger ones, can tell when their fermentations are complete and ready to be chilled and filtered: the diacetyl levels drop off precipitously. This is usually done with a gas chromatograph set up specifically for this task, although there are other methods for measuring diacetyl which are a bit dated and less accurate.  Yeast flocculation can also influence diacetyl levels in the same way that pre-maturely ending fermentation does:  highly flocculating yeast removes or “deactivates” itself before they have a chance to reduce the diacetyl.  Combine the variations in flocculating abilities along with the ranges of enzyme production and it becomes apparent that diacetyl production and reduction can vary considerably based on yeast strain.  pH, pressure, and temperature all play roles as well.
If valine levels in wort are prematurely depleted there is the potential for a second diacetyl peak, some of which will likely make it into the final beer. This is why brewers must insist on using high-quality malt with adequate levels of nitrogen, which, during mashing should lead to adequate levels of FAN and therefore valine. If poorer quality malts are used there is a risk of valine deficiency and high diacetyl levels (among the many other problems associated with brewing with poor quality malt).

Below is a diagram which shows how diacetyl production relates to other biochemical pathways during yeast metabolism.

The second-most influential way diacetyl is produced in beer is through bacterial infection. Two main bacterial culprits are to blame for this: Pediococcus and Lactobacillus (Gram-postive/catalase-negative cocci and rods, respectively). Both of these bacteria produce lactic acid, so when the buttery aroma is detected along with a sour character, it is pretty certain that an infection has occurred. The most common source of contamination comes from contaminated pitching yeast, as the bacteria hitch a ride with the yeast from brew to brew and gradually accumulate into populations which wreak havoc on your beer.

The final way in which diacetyl is formed in beer is during the aging of the beer. There isn’t as much discussion about this phenomenon as it doesn’t often lead to detectable levels of diacetyl since other oxidation or staling flavors can mask the diacetyl fairly well. This process is similar to the processes which create diacetyl during fermentation: the non-enzymatic oxidation of alpha-acetolactate. This occurs now even without yeast present since the yeast have excreted the alpha-acetolactate during fermentation. This happens more often when the yeast is somewhat dysfunctional; having lost some of the ability to metabolize all the alpha-acetolactic acid leaves more in the final beer which results in the production of diacetyl via an oxidation reaction with other wort constituents (such as melanoidins).

I hadn’t heard of this phenomenon before last year, so here in The Lab we decided to look into diacetyl formation during aging as a potential marker for beer age (or abuse).  We found some interesting results. 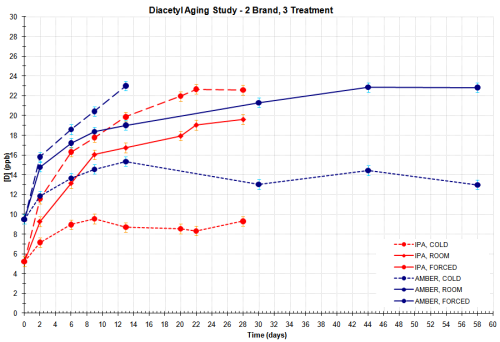 The second chart shows a third ale after having the crown removed, the bottle’s headspace replaced with air, and then being re-crowned.  You can see the dramatic effect that oxygen had on diacetyl production.

This final chart shows the effect that the three temperature treatments had on an unfiltered beer.  This one is the most interesting to me, as it bucks the trend set by all the other beers we looked at and provides good food for thought.

It seems that the yeast in this unfiltered beer has a pronounced effect on diacetyl levels in the package.   It probably does this in a few different ways: by taking up minor amounts of oxygen left in the package (thereby slowing the affect seen in chart 2 above), by enzymatically reducing diacetyl to acetoin (like at the end of fermentation), and possibly by lowering the alpha-acetolactate levels remaining in the beer (lowering the amount of pre-cursor for oxidative diacetyl formation).  The beer which was kept cold had the slowest reduction in diacetyl, likely due to the slower yeast activity, but it also remained low the longest probably because the cool temperatures kept the yeast alive enough to have remained somewhat active.  The room temperature sample’s diacetyl levels dropped the fastest.  I believe this is because the temperature wasn’t cold enough to hibernate the yeast, but it also wasn’t warm enough to either kill the yeast or “overpower”  its ability to limit oxidation.  Eventually, this room temperature beer rose above the cold sample, probably because the yeast eventually tuckered out and was unable to “fight” against the normal oxidative processes.  The diacetyl levels in the forced sample fell at a rate between the room temperature and the cold samples, possibly due to “normal” oxidation being mitigated by the yeast’s inhibition of said oxidation.  After a short time, levels shot up quickly;  probably an additive affect of the accumulating oxidation, and the death of the yeast which released a number of compounds into the beer (which likely included more alpha-acetolactate).

How to limit diacetyl production

So how can the small-scale brewer or homebrewer use this information to limit diacetyl in their own products?

The problem for small brewers is that they rarely have the $50K to drop on a gas-chromatograph, and therefore have no way of knowing when their fermentation is complete, aside from the cessation of the drop in gravity.  This might be alright, most of the time, but if a small brewer lacks the capacity to meet demand, then they may be inclined to chill and package the beer as soon as the gravity stops falling, but this could “trap” a significant amount of diacetyl in the beer since the yeast hasn’t been given enough opportunity to reduce the diacetyl levels. However, even small brewers can afford the best analytical tool(s) when it comes to beer flavor: the nose. It doesn’t take long to train a panel for diacetyl recognition (imitation butter flavoring from the grocery store can be used as a flavor standard), and once you find out who your most sensitive tasters are they can become your walking, talking gas-chromatograph.

This entry was posted in Defects and Taints and tagged defects, diacetyl, flavors, taints. Bookmark the permalink.