It’s been recognized in beer since the 1870’s, and it may just be one of the most well-known flavor defects in beer across the world. Just because it’s recognizable, however, doesn’t mean people are necessarily bothered by it since Corona and Heieneken sell plenty of bottled beer. It’s becoming common knowledge among some of the beer-drinking public that putting beer in clear or green bottles will allow it to become skunky or “lightstruck”. Following right behind is the growing awareness that, with the use of specialized hop extracts, brewers can successfully put beer in such bottles without resulting in skunked beer (Miller products being the best known of these). We’ll discuss these topics and more as we explore this phenomenon. A warning: there will be chemistry.

First, the molecule: 3-methylbut-2-ene-1-thiol, but you can call it 3-MBT for short. With a threshold of around 4 parts-per-trillion in beer, 3-MBT is among the most potent flavor compounds that can be found in beer; as such, it does not take much to ruin your beer. If you drink your beer from a pint glass on a sunny patio you may notice this flavor by the time you reach the bottom of the glass – that’s how quick this problem can arise.

Here’s the little bugger now. Rather innocuous looking, isn’t he?

3-methyl-2-butene-1-thiol, or 3-MBT: Source of Lighstruck / Skunk flavors in beer

We’ll take a small break here for a minor organic chemistry lesson involving molecular nomenclature. The great thing about O-chem is that there are rules by which molecules are named, and if you know the rules you can figure out the molecule’s shape and features. Let’s take 3-methylbut-2-ene-1-thiol: the “but” part of the name tells you that there we are dealing with a carbon-chain that is 4 carbons long (1 carbon: meth-; 2 carbons: eth-; 3 carbons: prop-; 4: but-; 5: pent-; etc etc). Each carbon is numbered sequentially, and I’ve included the numbers in the image. As the name implies, there is a “thiol” group on the number 1 carbon. A thiol is like an alcohol group but with a sulfur atom in place of an oxygen, -SH instead of -OH. Continuing to look at the name we see that on the number 2 carbon there’s an “ene” group, which means that there is a double bond between that carbon and the next. Finally, on the number 3 carbon, there is a methyl group (essentially a branch made up of a carbon “chain” made of only one carbon – remember “meth-” meaning 1 carbon?). So, if one of the carbons off of #3 is a methyl group, which one is the #4 carbon? For the purposes of this molecule, it can be either one, and whichever is #4 then the other is the methyl group. This concludes the nomenclature lesson. Now, back to the… well, more chemistry I guess.

So, how does it all happen? It’s a bit of a complicated process consisting of a small handful of reactions, but let’s take a look at them. Since about the 1960’s it’s been well established that the blue part of the visible light spectrum (~350-500nm) is the most efficient at generating lightstruck flavor, although ultraviolet light (below about 380nm) is capable of initiating this process as well. Brown glass bottles block light that is below about 500nm, while green glass bottles begin to block light below about 400nm and clear glass blocks no visible light. So visible light between 400 and 500nm poses a problem for beer in green bottles, and brown bottles are roughly 4 times as protected at these wavelengths. Owens-Illinois is rolling out some black glass bottles soon and as you can imagine, and from what they’ve told me, it has similar light protection capabilities to the standard brown glass.

There are essentially two potential mechanisms for lighstruck flavor to occur. The first involves direct irradiation, by UV-B light, of the isohumulones. In this mechanism, UV-B light excites the isohumulones into what is called the “singlet state”. Basically, part of the molecule has a higher energy level than it did previously. Through a few “shuffling” mechanisms, this energy is transferred to the acyloin group (which is just a hydroxyl group adjacent to a ketone; can be seen at the lower left of the 5-membered ring) which then undergoes a “Norrish Type 1” cleavage which separates the side chain at that acyloin group. This newly cleaved side chain, now also a radical, then loses its carbonyl group and goes on to trap a sulfhydryl radical to form 3-MBT. The sulfhydryl radical has been shown to be produced by a reaction between triplet-excited riboflavin and the sulfur-containing amino acid cysteine. The mechanism is shown below. If you open the image in another window, it’s slightly clearer. 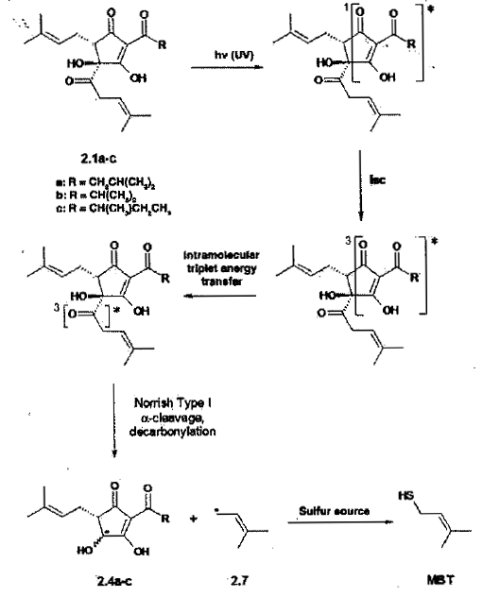 Mechanism for production of 3-MBT by direct irradiation (UV-B), source cited below

The second possible mechanism for the development of lightstruck flavors is the “sensitized irradiation” mechanism, which is caused by visible, particularly blue, light. This happens when riboflavin is excited to its triplet state where it then removes an electron from an isohumulone molecule. This leads to a cleavage of the radical side chain and decarbonylation of said-side chain, similar to the direct irradiation mechanism. Finally, the triplet-excited riboflavin reacts with a cysteine amino acid which produces a sulfhydryl radical that can recombine with the side chain to form 3-MBT. Does your head hurt yet? The mechanism is shown below. 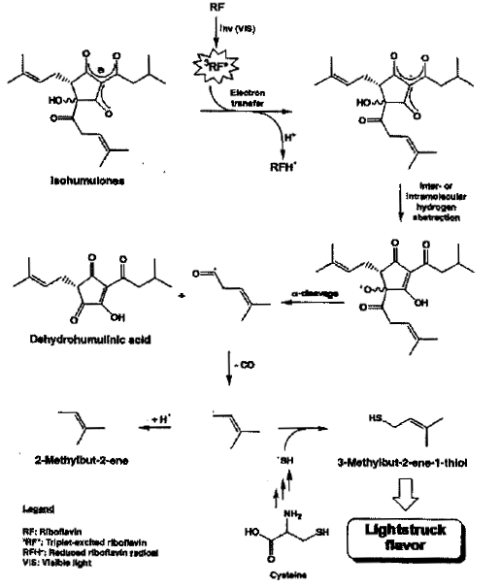 Mechanism for visible light-induced formation of 3-MBT, source cited below

So some of you may already know that there are a few different specialized hop products that are available which can be used to prevent lightstruck formation, but I bet that you probably do not realize that these hop extracts do not actually prevent the photodegredation of iso-alpha acids as much as they prevent the formation of 3-MBT. So, what’s the difference?

First, let’s take a step back and look at what these hop extracts are. When isomerized alpha acids (known collectively as isohumulones) are hydrogenated at various locations, they can form what are referred to as “reduced iso-alpha acids” – the “reduced” referring to the gain of electrons from the hydrogenation process. There’s two different ways to do this and three different hop products can be made from these procedures. The graphic below shows how the isohumulones relate to these three reduced forms.

If you look at the four “chemical reaction” arrows, you’ll notice that the two methods involve the use of sodium borohydride (NaBH4), which reduces the carbonyl group (=O) on the side chain to an alcohol group (-OH), as well as the catalytic hydrogenation, which uses hydrogen gas and some palladium catalyst to hydrogenate the double bonds in the side chains. When using the first method, dihydroisohumulones are created (also called “rho-isohumulones”) and these are most commonly used to add light-stable bitterness to beer. When the second method is used, tetrahydroisohumulones are created (also called “tetra”) and these are most often used to increase bitterness (they are more bitter than native isohumulones) and head retention. When both of the above reactions are used, then hexahydroisohumulones are created (“hexa” for short), and these apparently aren’t used for much at the moment.

These reduced extracts are usually considered “stable” from a photodegradation standpoint, since when they are used in place of traditional hop products the beers seem protected from producing 3-MBT. But these compounds are not, in fact, resistant to photodegradation. They degrade and take part in the same basic reactions as regular isohumulones, but they do not result in the same radicals or, ultimately, sulfur compounds that are as flavor-active as 3-MBT with its ridiculously low threshold. So effectively they do protect the beer from skunking, even if they still degrade and produce some potential flavors.

In conclusion, how can we inhibit the development of lightstruck flavors in beer, today?

Solutions for the future?:

So, we now know that this is quite a complex set of reactions that take place, so much so that it has only been fully understood in the last 5-10 years or so. I hope all the chemistry-speak didn’t make your face melt and your children weep over your exploded body, but there really isn’t a way to discuss this without all the big scary terms.

This entry was posted in Aroma, Defects and Taints, Oxidation and Staling and tagged 3-MBT, lightstruck, skunky. Bookmark the permalink.